In the past few weeks, the Uber system revealed some strange anomalies. Because of this perceived randomness, an Uber driver almost got blocked from accomplishing his driving goals. What happened last night shined light on possible interference outside of the driver's control.

An Uber driver repositioned himself in Berkeley to complete his last 6 rides. He had plenty of time to achieve this goal, although getting connected with his second client in the outer East Bay, who requested to pick up food he previously ordered and requested a trip far away from the action, probably cut a huge chunk of time out of the evening.

This Uber driver already knew the East Bay and San Francisco delivered the most action. It is best to drive in these regions in the early morning, evening commute, and toward the late evening. He gave himself plenty of time to reach this Monday promotion. However, the driver soon discovered the Uber driver app would produce a fatal error for the first time ever.

Out of all times, the Uber driver app refused to install an update on the iPhone. First time this happened in over 2+ years of driving with Uber.

The Uber app constantly stalled out, and then the iPhone issued a stunning blow to the night-- it was not trusted to run on the iPhone! This Uber drive app couldn't be supported on this iPhone? Wow!

No matter how many "install" actions were forced, the driver app just showed the following message. 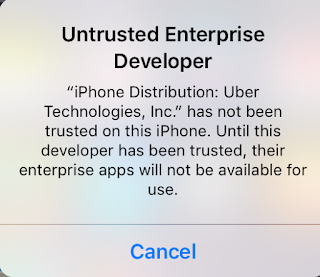 The Uber driver refused to allow this Uber app anomaly to block him from reaching his promotion. As you can see below, the Uber driver app appeared incomplete. The Uber driver sprung into action to restore this driver app. It was smart of him to save a past text message an Uber employee sent him back in September 2015. When this driver changed vehicles, he requested to return the Uber phone and opted to use his personal iPhone.

Most know that an Uber phone is one dimensional. It only allows a driver to start and stop trips, view past trips, and to see past direct deposits. This phone blocks all app downloads, Google Maps and Waze. It won't allow phone calls, text messages, and email usage. For the most part, drivers pay a deposit and a weekly fee for limited use. Clients who see drivers use Apple Maps won't trust their directions. Therefore, resorting to in-app navigation is recommended to keep one phone in plain view.

Uber drivers need access to phone calls and text messages. Even before the launch of in-app navigation, drivers would rely on their personal phones to provide service. If pin drops were far off, they would send text messages and make phone calls via their personal phones. Uber sent out past warnings (few years ago) that customer complaints on drivers not answering their calls could lead to deactivation. It is imperative to answer client calls, or risk poor ratings, bad feedback and complaints.

Back to the Uber anomaly that almost ruined the promotion night. The Uber driver clicked on the app link in a text message he received from an Uber support associate. Unfortunately, the iPhone blocked this download of the Uber driver app. Nearly 30 minutes of time was lost troubleshooting the Uber app.

With technical experience dealing with Iphone and computer hardware, this Uber driver deleted 7 apps on his phone to clear storage space. He attempted to download the Uber driver app again. It worked! After this, the driver forced the install of the driver app update. This operation worked!

30 minutes of good driving was lost troubleshooting the Uber driver app. It took another hour to receive a ride request. In 2 hours, this driver completed only a few rides. He lost valuable time to reach this promotion. At this pace, the driver would likely miss completing 10 trips before midnight.

Determination, persistence, perseverance, and patience allowed this driver to accomplish his goal. He drove around the East Bay to position himself close to future ride requests. Finally, rider number #5 arrived. Then, rider #6 requested before 11p.m. 4 more trips left, but only an hour to complete them.

A few minutes later, the driver got hooked with rider #7. This trip took about 7-8 minutes to complete. 30 minutes remain to accomplish this promotion. An UberPool trip arrived with 29 minutes to go. Once this driver arrived to pick up rider #8, rider #9 connected to the pool trip. The Uber driver had no idea where the second client would travel, so he hoped to complete this UberPool in time to chase after #10.

After dropping rider #8 off, he started rider #9 trip. He soon realized this trip would go into San Francisco. San Francisco cost this driver three past promotions, as too much time was required to travel in the city through traffic. He noticed the trip would take exactly 25 minutes and this would put him past midnight. To reach this promotion, the driver needed a third UberPool rider before entering SF or in the city, or an UberX back-to-back ride request to link up.

The driver made an important decision to remove his FastTrak out of the static bag and just enter the Fastrak lane. He knew he could make a payment to cover this toll cost. Normally, this driver would pay cash and get a receipt if his Fastrak went a few dollars below $0. He knew if he stopped that his promotion would be impossible.

Once this UberPool approached the city, time began to wind down. Yet, less than 5 minutes remain and no ride request. All this effort dealing with the app crash issue, slow business, one UberPool ride, and taking a trip earlier in the day, would amount to only 9 trips. Without warning, rider #10, an UberX, connected to this UberPool as a back-to-back trip. The Uber driver said he celebrated his accomplishment with rider #9, who showed interest in him reaching this goal.

Rider #10 mentioned that Uber sends out critical errors to 1% of the drivers. He admitted that it was unfair to do, but it helped to get valuable feedback to make appropriate updates. This Uber driver responded fast, using many troubleshooting operations to ensure he would have enough time and complete enough trips to qualify for this $100 Monday promotion. He learned valuable lessons that you must complete trips when busy, save important links to re-download app, and have enough money on FasTrak to save time. It all worked out, but the entire process was exhausting like a sports event.

In the end, this driver's willingness to stay competitive earned him $100. He continued on to complete additional trips and is now gunning for the maximum bonus. Never give up on your goals. You never know when opportunity will arrive to reward all your hard work and effort.