Uber drivers are discouraged to drive. Fare cut after far cut is making it tough to earn money with Uber. What made driving with Uber fun was surge pricing. Short trips were multiplied to help drivers increase their hourly averages. However, Uber keeps reducing fares and using excuses to make drivers believe this move is helping them to make more money.

What are price cuts really doing? Drivers are more stressed because they are completing far more trips per hour. They are driving longer periods of time to make less. Furthermore, Uber drivers are unable to opt out of the worst feature: back-to-back rides.

Uber drivers should have a choice to enable and/or disable this feature. Uber drivers are not machines; they are real people who need to take breaks. They need to drink liquids, use the restroom and eat. Sadly, Uber is thus telling their drivers this feature is reducing their downtime.

The higher fares and downtime helped drivers to keep motivated. They could rest until the next good ride request arrived. Now, Uber is stressing out their drivers with connecting to numerous trips without having the option to avoid such rides. When a driver ignores a trip, they are penalized with a lower acceptance rate. As a result of this, Uber is denying these drivers a guaranteed match if they miss hourly earnings.

Many drivers are constantly voicing their dissatisfaction in recurring price cuts to clients. Clients understand the pain of these price cuts.

If Uber is really stimulating trips, why are drivers missing 1.20 trips per hour average in the East Bay? One Uber driver averaged 1.18 trips per hour in a sequence of time and missed the 1.20 trips requirement. Uber disqualified this driver from receiving an hourly earnings match. Moreover, this driver also missed the acceptance rate of 90% on a Friday night with 88.9%.

Reason why? The driver had to use the restroom, but a back-to-back trip arrived and they ignored this. When they attempted to go offline, the app went haywire and another trip arrived. Therefore, the driver was penalized for not accepting two trips. They scored a 88.9% and missed out on the guarantee. What makes this frustrating is that this driver scored a 96% acceptance rate for the entire week.

Uber is petty to disqualify drivers. They don't want to pay out bonuses. Whenever their UberPool malfunctions, drivers try their best to accept rides. Riders are irresponsible to request and cancel rides over and over again. This creates a poor user experience for riders occupying a current trip. If a driver chooses to ignore a request, they are disqualified for failing to meet promotional conditions. Uber allowed a rider to request and cancel 9 times. This rider threatened to harm the driver. Unfortunately, Uber did nothing to resolve this issue.

Multiple price cuts in the East Bay of the Bay Area has hurt many drivers. It's sad to say that Uber is far behind Lyft. Lyft is allowing their drivers to receive tips on the app. Riders are requesting rides often under Demand Pricing to reward their drivers. Lyft drivers are earning as much as $1400-$1500 per week. In contrast, Uber drivers must work 30-40% longer to make gross earnings that match Lyft. Uber may be helping their clients to get great deals, but they are killing their drivers. That is the 100% truth.

We talked to an Uber driver yesterday that has no interest in driving right now. He went out to take a few rides and got discouraged after making 10 minimum fares over 4 hours that earned him $30, after all fees were deducted. If Uber drivers keep struggling, they will sink fast. After weekly lease payment, gas, Uber fees, airport fees, $1.35 safe ride, upfront toll cost, and etc, drivers are receiving less than Uber's cut.

Uber still has yet to introduce a tipping feature. After two years of promising this, they still continue to ignore a way for their drivers to receive tips via the app. It really is horrible for drivers to be expected to work three times as hard on the road, since cheap fares are increasing production and making drivers the same amount of money. Drivers are pressured to keep accepting trips at a higher rate. When drivers complete 22-30 trips in a day, they are making a fraction of their past earnings.

Per trip average is way down. A driver who once earned X$ with 100 trips must now complete 130+ trips to make the same amount. Uber spokespeople believe in their ideology that reducing fares will increase the number of trips per hour. What this move is doing is increasing the number of trips per hour so Uber is getting more $1.35 safe ride fees. Uber claims they are also losing with reducing fares, but they forgot that drivers receiving 75-80% of the fare and are losing a greater amount of the trip than Uber.

Uber is a shell of its former existence. Driving with Uber is no longer a viable option to survive. Their higher guarantees in San Francisco force drivers to saturate this market. Those Uber drivers who were comfortable driving East Bay/South Bay clients are expected to make risky decisions, whether to keep losing in cheaper cities or enter the SF city limits to possibly get tickets from irresponsible clients standing at risky locations in downtown San Francisco. Should drivers increase their production to make the same? Will they be able to drive safely? Let's not forgot Uber rarely mentions how drivers are supposed to use the restroom.

Back-to-back feature should be disabled. If a driver chooses to opt out of this feature, they should be able to press "last trip" so no ride requests arrive during the end of this trip. If Uber can't launch a tipping feature, we shouldn't expect them to develop a button to disable back-to-back rides. According to Uber, "When you need to take a break or finish up for the day, just don't accept the final trip like your normally would and go offline." What they fail to mention is that ignoring this trip and experiencing technical difficulty could disqualify drivers from guaranteed earnings in that time slot.

With Uber, you don't have the freedom to drive when you want. Back-to-back feature is complicating flexibility. Uber drivers are on the hook to keeping doing when they want to stop driving. Furthermore, drivers must increase the number of hours on the road, take more trips, spend more on gas, travel longer, and deal with additional clients to make the same amount of money. It is highly stressful to drive with Uber right now. Lyft drivers have it far easier and are making way money more than Uber drivers. This is the honest truth: Lyft drivers are outearning Uber drivers and enjoy their jobs, too.

There are many rude Uber clients without a care in the world. They belittle drivers. They rate drivers low. They vomit during trips, which Uber refuses to cover any lost time cleaning this mess. A driver can lose hundreds dealing with a vomiting rider. It's not the driver's fault the client is reckless. Riders use drugs, drink alcohol, pile riders over the seating capacity and in a recent case, they inappropriately touched their driver. These riders expose their drivers to major risks. Ridesharing is no longer as fun; it is nowhere near as profitable. Uber drivers assume most of the risk to make peanut earnings.

It's getting so bad that an Uber driver may need to go bankrupt, because driving with Uber cost him thousands the past few years. His previous vehicle is locked down from driving in an out of the bridge so many times and he couldn't afford to replenish his Fastrak. Thousands in toll violations are blocking his vehicle registration. The State of California is also blocking him from receiving any future tax returns. High repair and maintenance cost doomed him. This Uber driver was forced to lease a vehicle from Uber, but two fare cuts later in the East Bay destroyed his earnings.

See below: Uber driver earnings for the past versus the previous 8 weeks before price cuts. This Uber driver is discouraged to driver for low pay that it affected his overall earnings. His driver earnings dropped considerably, so all of his past earnings were used to make up for this loss in pay.

How recent fare cuts impacted driver earnings? The past 8 weeks minus Uber fees, airport fees, $1.35 safe ride fees, lease payment for Uber leasing program and fuel expenses leave this driver with the following weekly earnings below. Truth is that this driver finds it physically tiring to increase their hours to stay on the road longer. Instead of driving a steady 10 hours, now they are expected to drive 20 hours to make the same amount as 18 months ago. East Bay earnings are really low. All he sees is minimum fares which pay out $3.20 after all fees. Good trips are now $6 rides. Airport fares are no longer exciting with too many fees and cheap fare rates. 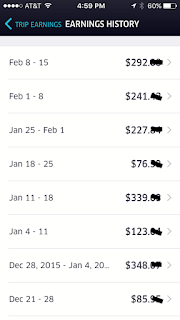 The good times driving with Uber are gone. This Uber driver once made consistent earnings. He completed hundreds of trips per week. He was working toward paying off bills. It won't happen now. It's unprofitable to drive with Uber right now. The earnings you see below after all fees, vehicle lease payment and fuel cost, will never be duplicated without increasing the number of trips by 30-50%. 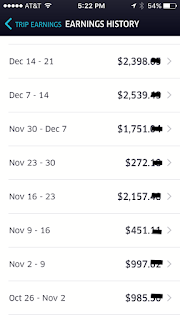 Visual data doesn't lie. Believe Uber if you want, but the truth is that reducing fares is a strategy to push out the competition. It is also a way to generate many $1.35 safe ride fees for Uber to increase their share of the fare. Drivers are working harder and are far more stressed. They make much less doing double the work. Unfortunately, drivers can't use the restroom as much. Drivers who were once treated as people are becoming robotic machines.

Clients will submit low ratings because Uber allows them to rate within 24 hours. Anything can happen in this time frame to change their minds. Drivers must rate after every trip. Some clients use the rating system against Uber drivers to manipulate them. Uber is told about this poor treatment and they do nothing to resolve conflict. They tell drivers they are good at what they do and can increase their score with receiving 5 stars.

The deception we hear in lowering fares to increase driver earnings is unethical. Drivers are making less money. They are spending more time on the road. Their cars are depreciating much faster. If you view the earnings above, you can see this driver was effective and is now struggling.

Uber still won't introduce a tipping feature to help their drivers survive the tough times. Lyft has had a tipping feature since their launch. Just goes to show that the most popular company is not always the best option. Uber is less than a minimum wage job with a ton of risks that can ruin the lives of their drivers. It was once an awesome opportunity to make a living. That dream is now in the distant past.

Drivers are discouraged to get on the road. Lower earnings are reflected in long trips that once cost $100, which are now $35. It takes a driver several hours to make what 1 trip paid in an hour. You do the math. Do you think Uber drivers deserve this treatment? Lyft drivers who are less experienced are raking in the dough. Uber drivers are on the verge of going bankrupt.