Uber reduced fares in many markets. These fare cuts have taken a toll on drivers, influencing their earnings and motivation to drive. After fees and deductions, drivers are making a few dollars an hour. Reducing fares can/will change the ridesharing landscape.

The real facts are shown in the image below, revealing how reducing fares can stimulate more minimum trips. Trips that once cost $8-9 and now $5.35. Riders can travel further for a minimum fare. $5.35 is charged to rider, including $1.35 safe ride fee that goes to Uber, and 20-25% Uber commission.

Drivers operating at the 20% commision rate receive $3.20 and $3.00 for 25% commission. Recent fare cuts increase the number of minimum fare trips. When long trips are less frequent, drivers will earn much less.

Drivers expressed their anger; they are telling their riders that these cheap fares are hurting them. Uber continues to cut fares. They disqualify drivers from receiving hourly guarantees based on using loopholes. Unless you want to sit and drive for 100 hours a week in your vehicle, you won't make money working the same hours before these recent price cuts.

This current month, January, is the worst period to work with Uber. It is disgustingly terrible to receive weekly payments that don't compare to Uber commission. Why does Uber keep reducing fares?

Uber claims that reducing fares will stimulate business, increasing trips and making drivers more money. This is so far off the truth. Drivers are earning way less money and increasing total trips. Real data can prove this claim.

It only took a month for a long-term Uber driver to financially sink into a dark hole. Clients are begging drivers for a tipping feature. You think Uber will wise up and make this happen? Uber doesn't care about their drivers. Their lack of action support this claim.

They don't care about introducing a new tipping feature. Everybody know this. Uber doesn't want to burden clients, so they take care of their riders to make them all happy. Meanwhile, Uber drivers are stuck in a bad place and really can't afford to perform ridesharing services anymore.

Beware of those short airport trips. After Uber fee, airport fee, and safe ride fee, you will make 50% of the fare.

See the number of minimum fares below. It was never like this before. Clients travel further for minimum fares. When fares drop, this means per mile and per minute fees decrease. Why doesn't Uber reduce their commission if they believe January is a bad month?

Their current Winter Slump is the worst ever. They use time increments to disqualify drivers. It is easy to tell a driver they didn't qualify because they miss trips per average by .02 or acceptance rate by 3% in a specific time slot.

If you review overall hours, many drivers will meet the minimum acceptance rates and trips per hour. Uber is using a poor strategy to offer guarantees and deny these miscellaneous matches.

As a result of this, a driver is now earning $15 per hour before Uber fees and other deductions. When it is all said and done, a driver performing 30 hours will make less than $100 for an entire week.

In order for drivers to make money, they must invest 70-100 hours per week. This is really tough to do with low fares, which discourage drivers to increase their hours to earn the same amount of money. 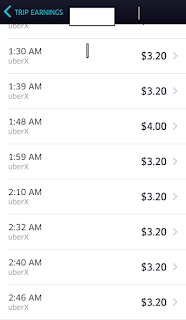