Sidecar, one of the earliest ridesharing companies, shifted their resources into the delivery space to stay afloat. On life support, Sidecar made a valid attempt to survive against Uber and Lyft. However, these two app-based technology companies, Uber and Lyft, dominated ridesharing services and eventually pushed Sidecar out. In a shocking move, Sidecar has thrown in the towel; they ceased all operations on December 31, 2015. After 4 years in existence, Sidecar closed their doors and sold their assets to GM Motors.

Poor leadership and management possibly resulted in Sidecar's closure. This ridesharing company believed that abandoning the movement of people and shifting into the delivery space would keep them relevant. They did a poor job marketing their company. Most ridesharing users outside of San Francisco never heard of Sidecar. Their lack of marketing was a bad move on their part.

Sidecar stopped offering driver referral and rider referral incentives last summer. This incentive-based system enabled drivers to refer thousands of riders and hundreds of drivers for a cash reward. We believe Sidecar made a huge mistake to discontinue this program.

Moreover, Sidecar deceived their drivers, telling them to get on the road on December 31, 2013 using a 3x pricing offer. When Sidecar drivers went online, prices didn't exceed 1.5X. As a result of this, CEO Sunil Paul apologized to drivers because he assumed demand would reach a level where they could offer 3X fares to drivers. On New Year's Eve, Sidecar riders got rewarded with cheap fares compared to Uber surge pricing that went berserk a few years ago.

Another mistake Sidecar made was allowing drivers access to surge pricing. Their drivers could set rates as high as 5x, which discouraged Sidecar users to take rides. Riders use ridesharing companies based on preference and price. When prices are manipulated to gouge riders, users eventually choose the next competitor to request a ride.

Sidecar had a shot with Shared Rides. They were the first rideshare app to introduce carpooling services. Then, Uber and Lyft launched UberPool and LyftLine, in that order. Sidecar held contests to reward riders with free trips for an extended period of time. Focusing on carpooling services could have kept Sidecar in the ridesharing discussion. Sidecar relied on San Francisco so much that they missed out on expanding their services in other hot markets beyond their 8 cities.

It is a shame that Sidecar failed to reinvent their ridesharing services. Their rideshare app featured the best integration of ride features that Uber hasn't adopted yet, such as favoriting your drivers and setting filters to stay within a specific area. Riders could increase the cost of rides as a way to tip drivers. Uber is still lagging on their in-app tipping feature. Lyft already has the tipping feature covered. Furthermore, Lyft is on an advertising binge across radio stations and on billboards. We also see their ads rotating on top websites.

In our opinion, Sidecar mismanaged their resources and failed to listen to great ideas. Rejecting innovation impacted their bottom line. Why not get the word out? Send people outside of San Francisco to market their services. Limiting Sidecar to 8 cities across the United States restricted them. Once Sidecar discontinued referrals and opted to enter the deliver space, we knew their end would soon come.

It came as a shock to learn that Sidecar ceased operations, but abandoning their rider base doomed their company. Loyalty matters the most. Drives probably sensed that picking up shifts to deliver packages and food lacked sustainability and convenience in a highly competitive delivery space. What could have helped Sidecar compete was to acquire Sidecar.com, instead of using Side.cr (A domain hack they assumed could work). Uber and Lyft own the very best names that describe their companies, both which are 4-letter names. Sidecar chose to continue using a domain hack in Side.cr.

Ultimately, Sidecar got pushed out because they kept experimenting with ways to attract riders. In the process, they influenced their driver base to jump ship. For the most part, Sidecar drivers got sick of riders abusing flat rate trips. Allowing riders to select a trip on a flat rate, and then expecting drivers to sit in traffic with no extra pay proved to be costly. Therefore, riders would request drivers to make multiple stops on these flat rate trips. Imagine Uber running their platform on a flat rate system. An unpopular move such as this would push out many Uber drivers, because there are many clients who would take advantage of fixed priced trips. Low driver earnings on the Sidecar platform represented another problem area. Too many minimum fares discouraged drivers and this influenced their driving habits.

Lastly, Sidecar relied on their app technology and name to get ride business. Most people in San Francisco didn't know anything about Sidecar. This proved that Sidecar failed to properly market their ridesharing services. If people didn't know Sidecar in San Francisco, then imagine trying to inform a person about this company in the East Bay. A dream idea floundered, wasted on poor execution. Now, all we can do is reflect on this past memory which was once Sidecar.

Thank you Sidecar for giving us 4 great years. Your former drivers and riders enjoyed your ridesharing services while they lasted. We sincerely regret that you didn't make early moves to remain competitive. All your resources could have expanded Sidecar into larger markets. You had a shot to compete, but kept starting all over with new ideas that didn't fit your original idea of transporting people. Never lose sight of what got you there - riders and drivers. Good luck on the future! Best wishes!

The following is a letter addressed to Sidecar drivers about the closure: 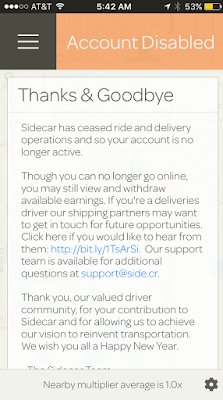