What does Dubs mean for Golden State Warriors? 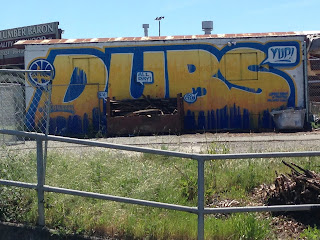 Golden State Warriors are making a title run in this current NBA Finals. We hear so often the alias "Dubs' used to describe the Warriors. What does Dubs mean?

Dubs is an abbreviation of "W," but spelled out Dub-a-you and shortened to Dub. Because the Warriors are a professional team, an "s" is added to "Dub" to make "Dubs" into a nickname that applies to the Golden State Warriors as a cohesive group.

The media use Dubs often to follow the trend. We all know media outlets are unoriginal biters. They flip flop between favorites and attack weaknesses to boost ratings and website traffic.

The Dubs are viewed as the clear favorites to win the 2015 NBA Title. It is shocking to watch the Dubs in the NBA Finals, especially since this team were once the laughing stock of the NBA. Believe it or not, the Dubs have the best home and road records, the top defense and the second best offense in the NBA. They also own the best NBA record of 67 wins.

Until the Dubs win 4 games, don't count out the Cavs. Dubs is short for Warriors. Spell out dub-a-you and add an "s' to this and you now have Dubs.

As experts expected, the Dubs finished off the Cleveland Cavaliers in Game 6. A hard fought series in the first 3 games turned into a one-sided affair, as the more deeper and healthier team survived the wrath of LeBron James.  The Dubs are on top of the basketball world right now.

Go watch the Golden State Warriors (Dubs) celebrate their NBA Title in downtown Oakland this Friday. Use the ridesharing services below to make your attendance known. No drink and driving. Make this championship celebration as a safe atmosphere. Support your local team, The Dubs.

Use Uber and get $20 off as a new client. Download this ride app at Uber.com/app and use Uber promo code ts958u to activate $20 off first trip bonus. Take a ride to watch the Dubs celebrate their first title in 40 years.

Use Sidecar as a new rider and get $5 ride credit for free. Download this ridesharing app (like Uber) at side.cr and input Sidecar promo code qjbxk to activate this new rider bonus. Go to the Golden State Warriors title parade this Friday using Sidecar. Promo code is inactive until further notice. Unfortunately, Sidecar lost out to the rideshare champton, Uber. They went out of business on December 31, 2015.

Make some noise at the Golden State Warriors championship parade in Downtown Oakland this Friday.

Drive for Uber and make consistent income driving sports fans. Get $1000 bonus after completing 100 trips. Must be signed up and complete trips. Signup here.